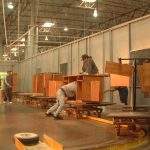 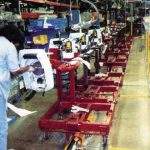 The RSI Assembly Conveyor is widely known in the product assembly arena. From the variable centers to the timely arrival to the workstation, this conveyor meets and or exceeds all your expectations.

With the conveyor running at the designed speed for your production requirements, a work station can still have variable times at a specified location. This does not effect the overall designed production rate. The workstation is also capable of early releasing the product, when finished.

Again, this procedure does not effect production times…